With just one month under his belt at Oracle Vision, Harvey Barker is still learning the ropes. We met with Harvey out on the road to see how this all-round Action Man is getting on.

What does your job at Oracle Vision involve?

A bit of all sorts, really! As an apprentice security engineer, I’m getting training in everything – CCTV, fire detectors, intruder alarms and access control. At the moment I’m just shadowing, supporting the other engineers out on the job.

I work four days a week, then on Wednesdays I’ll be going to college to get the qualifications I need for the job.

What were you doing before you came here?

At college I studied manufacturing, then electrical engineering. It’s great that I can bring some of the basics from that studying into my role here. When I left college I actually became a joiner, but it wasn’t for me.

How did you come upon the role at Oracle Vision?

I’m pals with another one of the engineers – Josh. When I told him I was looking to advance in my career, he mentioned that Oracle Vision were hiring, and that they were a really good employer. It was all really quick – I sent my CV, one week later had an interview, and a few days after that they offered me the job!

What drew you to Oracle Vision?

Josh’s recommendation made me think they were worth looking into. Once I had a closer look, I liked the sound of it being a family-based company. It seemed like they were a friendly team. Most importantly though, I liked that Oracle Vision is growing. At my interview they explained it had doubled in size since the year before. That appealed to me – it seemed like a really professional organisation, where I could grow and earn a qualification.

What do you enjoy about your work here?

I like the camaraderie with the other engineers. They’re my age, and we all get along well, so it’s great working with them. Because the company is growing, it also just seems like a great time to be here – they’re taking on more engineers and there are plenty of opportunities to develop.

What do you enjoy doing when you’re not here?

I’m quite an active person, and I have quite a few hobbies. I’m a boxer – I’ve got my first fight in November, and I’m raising money for Cancer Research. I’ve already raised £500 so far, and I’m looking forward to seeing what I can raise in total.

I also play rugby (number 13 – outside centre), and I’m quite into my shooting. I have an air rifle and shoot targets as well as small game. I love going out with my dogs – a soluki whippet cross greyhound and a whippet cross poodle.

If you could spend the day with anyone, living or dead, who would it be and what would you do?

Probably my aunty – she recently passed away. She died of cancer, which is what motivated me to do the boxing fundraiser. Not long before she died she got a new old English sheepdog, just like the Dulux dog, so we’d go out for a long walk together.

That sounds really lovely. OK, time for the quick-fire round:

Favourite place in the world? I’ve travelled quite a lot. I love skiing in Andorra skiing, but if I had to choose a favourite, I’d say Iceland. The Blue Lagoon and the geisers are incredible.

Favourite film? I have a few – Apocalypto, 8 Mile… 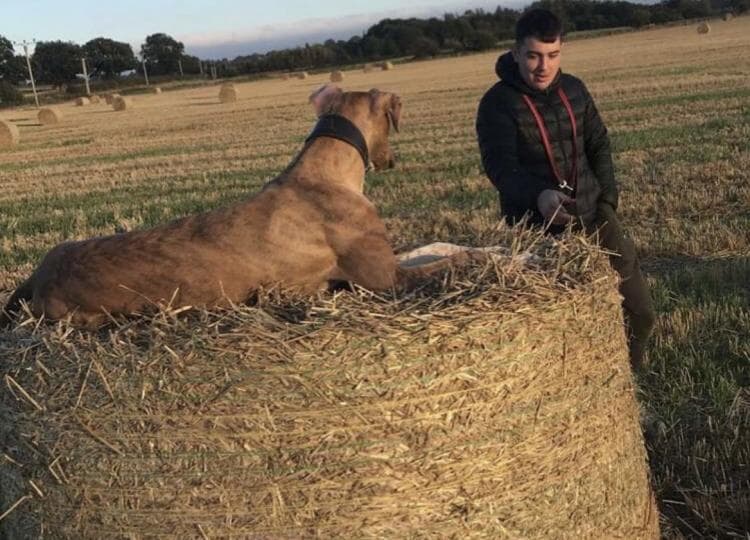